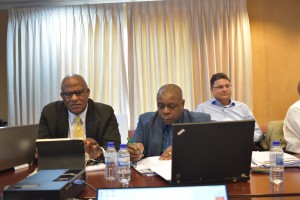 The Caribbean Employers’ Confederation (CEC) held its 56th Annual General Meeting on Thursday 17th March 2016, at the office of the International Labour Organisation in Port of Spain, Trinidad.

The meeting was preceded by a Strategic Planning Workshop for the executive members and staff of the CEC.

The President, Mr. Wayne Chen gave an overview of the work of the Organisation during the period June 2015 – March 2016.

Mr. Chen highlighted the strides made by the Organisation in its quest of being recognized as the regional voice of Employers; the official recognition by CARICOM, CARIFORUM and their member states and the EU- funded Project as activities which has allowed the Confederation to gain momentum and realize its greatest increase in membership in decades.

Welcome was extended to the following: ·

The President further recognized the contribution made by the ILO, through its retiring officer Ms. Anne Knowles and Dr. Giovanni Di Cola who has taken on higher offices within the ILO.

The meeting also addressed and completed a review of its constitution by creating new Vision and Mission statements and adopted several resolutions to include one new Director, Mr. Michel Henriquez from Aruba.

Member countries highlighted continued struggles within their respective countries in dealing with Social Dialogue and the review of Labour Legislations which are not given priority by Governments in the region.

The President encouraged members to support in the completion of the Skills Gap Survey and delivering of the findings along with the considering of new projects to be undertaken, to increase the capacity of the organisation.