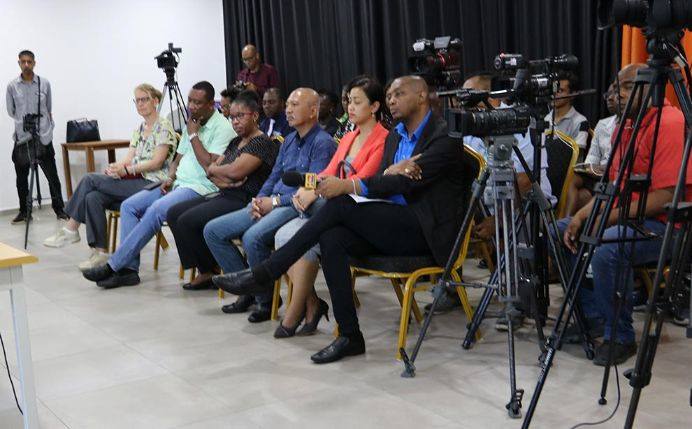 The Alliance for Decent Work for People with Disabilities (the “Alliance” for short) has launched its database on good employment opportunities for the press and selected invitees. The database, which was developed by Spang Makandra, was launched on Monday, June 17th at 11:00 AM at the Digital Talent Academy venue.

The database provides a digital platform for registering people with disabilities (PWDs), who are in need of work or wish to establish a small business. In addition, the database will function as a follow-up system and or monitoring tool for the performance of PWDs who are employed and or have a business. It will also serve as a matchmaking platform for unemployed people with disabilities and businesses/companies that are hiring.

The Alliance is a joint initiative between the Association of Surinamese Business (VSB) and the United Nations Development Programme (UNDP). The Alliance aims to promote decent employment and entrepreneurship among PWDs in Suriname. The proclamation of the Alliance took place in February 2018. Other entities participating in the Alliance are the Ministries of Labour, Trade, Industry and Tourism, and Social Affairs; plus organizations working with or for People with Disabilities, namely Nationale Stichting voor Blinden en Slechtzienden in Suriname (NSBS), Stichting Wan Okasi, and Unu Pikin.

Topic: The OSH Institute of Dominica

Eleven (11) safety representatives employed at various private sector businesses across the island are now professionally designated L-OSH after having participated in and successfully completed the first ever Licentiate in Occupational Safety & Health professional certification programme in Dominica. The training exercises were conceived and executed by The OSH Institute of Dominica® during the month of March, and candidates were assessed in April, 2019.  Three (3) other candidates who opted not to do the final assessment were awarded Certificates of Merit.

The conferral of designations and distribution of certificates took place on April 29, 2019 at an event also intended to recognise the World Day for Safety & Health at Work which is celebrated every year on April 28.  The event is an annual international campaign meant to raise awareness for safety and health in the workplace.  Every day, people die as a result of occupational accidents or work-related diseases – more than 2.78 million deaths per year, as reported by the International Labour Organisation, the ILO. Additionally, there are some 374 million non-fatal work-related injuries and illnesses each year, many of these resulting in extended absences from work. The human cost of this daily adversity is vast and the economic burden of poor occupational safety and health practices is estimated at 3.94 per cent of global Gross Domestic Product each year.

Delivering remarks at the event, Mr Aylmer Irish, Board of Governors member, spoke to the critical need of business and industry to invest in human capacities as the sure way of achieving their overall objectives.  Mr Irish complimented The OSH Institute of Dominica on working to build safer workplaces and imparting needed skills in employees as the more effective way to get this done.  Executive Director of The OSH Institute of Dominica, Mr Achille Chris Joseph, gave a brief history of the Institute from its founding in 2015 and including the roll-out of the Certified Fire Marshall programme in 2016, another first-of-its-kind in the Caribbean.  Mr Joseph informed the media that, “the traditional role of OSH has restricted its application to enhancing the bottom line at enterprises since it was viewed as a cost item only or in combination to first-aid activities.  OSH is much more than that.  It is actually a strategy to add value to enterprise and position the business to achieve mission efficiently.”

The OSH Institute of Dominica is a specialised agency of the Dominica Employers’ Federation, the latter being the national employers’ body on world-of-work and labour-market in Dominica.   The Institute’s training syllabi are governed by a Board of Standards comprising Chairman Heskeith Brumant of NPMC, Delbert Paris of Stewco Construction, Derrick Beazer of DOMLEC, and Achille Chris Joseph.